There are several access modifiers that can be applied to method declarations. Some of the modifiers can be combined (for example, final static). Some modifiers can only be used methods, while others can be used on classes or methods. 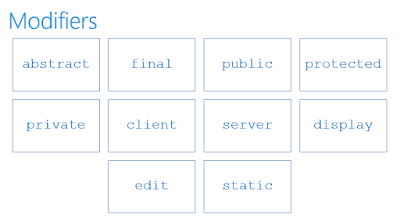 The following list describes the method modifier keywords of the X++ language.

Abstract: The method is declared but not implemented in a parent class. The method must be overridden in sub classes. If you try to create an object from a subclass where one or more of the abstract methods belonging to the parent class have not been overridden, you will get a compiler error.

Note: Classes can also be abstract. Sometimes a class represents an abstract concept, but it should not be instantiated: Only sub classes should be instantiated. Such base classes can be declared abstract. Consider the case where the programmer wants to model the concept of an account. Accounts are abstract—only derived classes (ledger accounts and so on) exist in the real world. This would be a clear case for declaring the Account class abstract.

Final: Indicates that the method cannot be overridden in any class that derives from its class.

Protected: Methods that are declared as protected can only be called from methods in the class and in sub classes that extend the class where the method is declared.

Private: Methods that are declared as private can be called only from methods in the class where the private method is declared.

Edit: Indicates that the method's return type is to be used to provide information for a field that is used in a form. The value in the field can be edited.

Static: Specifies that the method is a class method and does not operate on an object. Static methods cannot refer to instance variables and are invoked by using the class name rather than on an instance of the class (MyClass::aStaticMethod()).

In this blog, I will discuss how we set up an online VM for D365F&O for Technical and Functional learning purposes for free. Step: 1 Cl...